Welcome to the gallery! Please enjoy browsing our photographs.

The Day the Crayons Quit by Drew Daywalt

Children are having fun at home and in school engaging with our Battle of the Picture Books winning text. From making their own crayons, colouring imaginatively outside the box to book reviews, newspaper reports and writing letters from other classroom equipment. Check out their inspired work in the photographs below!

Battle of the Picture Books- WINNER

We have a winner! The children of Woodville Federation have spoken.

They have decided their favourite picture book is:

THE DAY THE CRAYONS QUIT  by  DREW DAYWALT

They fell in love with the funny letters written by the misused crayons. Something we can all relate to in school! A book with a final message that encourages us to use our imagination and think outside the (crayon) box.

Watch this gallery space for work from our planned fun-filled week at home and in school linked to this wonderful text. 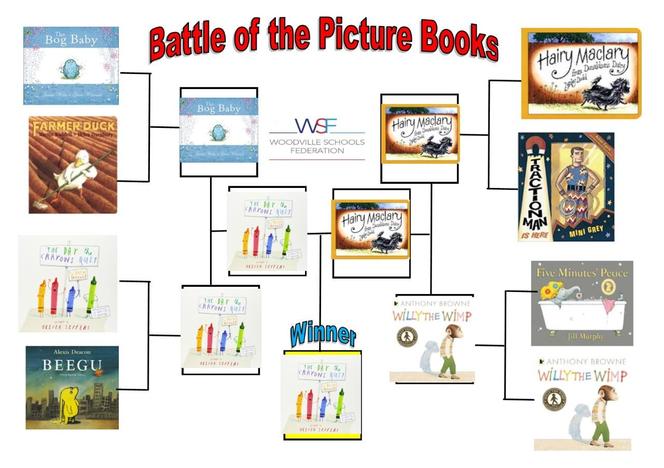 Check out these amazing front covers created by our pupils, using only household items. Such imagination! Who says lockdown is boring? Can you guess the book?

Battle of the Picture Books Winner- Round 6

After six long weeks, the final is here!

This week two very popular titles face off against each other, competing for the title of Woodville Federation's favourite picture book.

Who is your favourite? Cast your vote now.

The winner will be announced at 2pm on Friday this week. 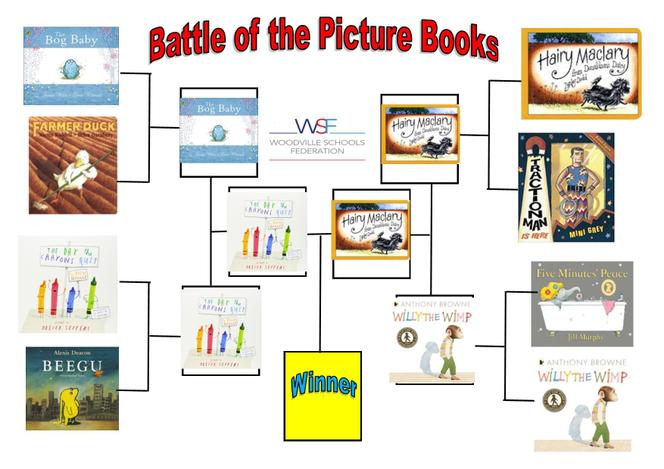 Battle of the Picture Books Winner- Round 5

This week was our first semi-final round. The Day the Crayons Quit by Drew Daywalt has done it again! A clear winner by a mile! We just can't get enough of those crayons.

It's still making us all laugh out loud.

Who are you going to put in the final to battle against it?

Vote for either Hairy Maclary or Willy the Wimp in the next semi-final. Battle of the Picture Books Winner- Round 4

Another close call... we were torn between sympathy for mum not getting any quiet time (something we can relate to at this time!) and support for the clumsy, apologetic chimpanzee, Willy. However, the winner of round 4 was Willy the Wimp by Anthony Browne. We liked his transformation but most importantly the fact he was still a kind, thoughtful chimpanzee.

Now we begin the semi-finals. Not long before we crown Woodville's favourite Picture Book. Get voting! 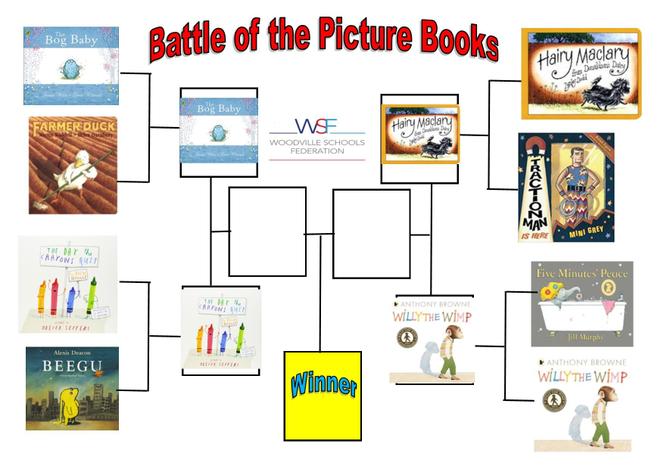 Battle of the Picture Books Winner- Round 3

This week was a very close call. Hairy Maclary from Donaldson's Dairy by Lynley Dodd narrowly defeated Traction Man. It seems we are a community that loves our dogs!  This well-loved classic still has a place on our bookshelves and it's rhyming, rhythmic story a place in our hearts. Battle of the Picture Books Winner- Round 2

Your winner this week was The Day the Crayons Quit by Drew Daywalt. We love the bright and colourful crayons. This story made us laugh out loud, especially poor peach crayon. We have listened to it again and again. Some of you loved it so much, you even bought your own copy!

Battle of the Picture Books Winner- Round 1

Round 1 winner was Bog Baby by Jeanne Willis and Gwen Millward. We have fallen in love with the cute, blue bog baby that sucks his toes. Lots of children liked the ending, where the pond was filled with tiny bog babies! On Wednesday 19th June, Year 1 had the fabulous opportunity of attending the official grand opening of the new park in Woodville. The children were thrilled to help cut the ribbon and then play with their friends. We are delighted to have been able to contribute to the fundraising towards this park and hope that the children enjoy making many happy memories there.

Rachel Greaves, author and illustrator of the Ruffles the rail dog books, joined us today for an assembly and introduced us to the characters in her books.

Well done to all the children (and staff) who took part in ACES (All Children Exercise Simultaneously) Day. Thanks to Miss Galpin who led us. 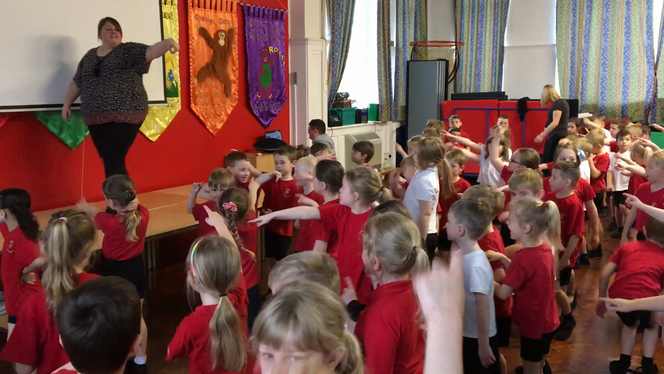 Today KS1 watched a performance, 'Togo and Nogo', by the Quickfoot theatre company. The performance was aimed to inform and educate pupils about being safer pedestrians and using safer crossing places. Togo and Nogo were aliens from outer space whose space craft had broken down, in search of a mechanic they needed to cross the road and were helped by the policeman and lollipop man.

All the children (and staff) thoroughly enjoyed it.

Today the Infant school had a visit from Image Musical Theatre company. They performed the story of 'The Selfish Giant' by Oscar Wilde, assisted by some of our pupils! We had a great time joining in with the singing. Some of us were scared when we first saw the giant and how mean he was to the children of the village but we were glad when he learned how to share and became a big friendly giant.

Foundation Stage children sat beautifully through their first whole school event. The teachers were very proud of them.

Check out the pictures below. 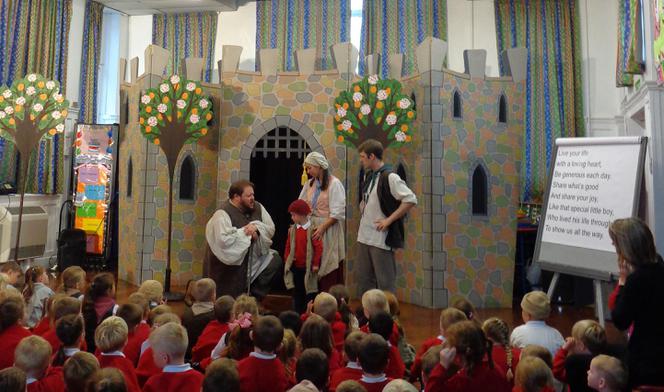 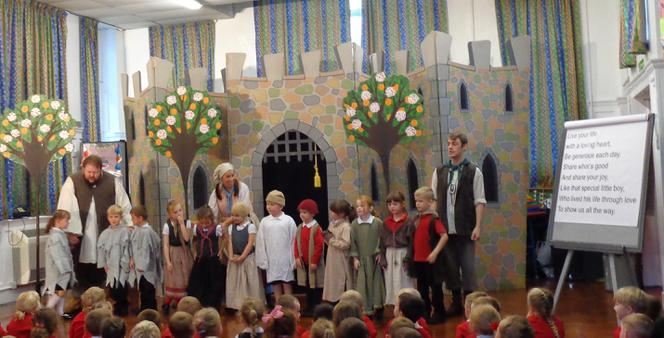 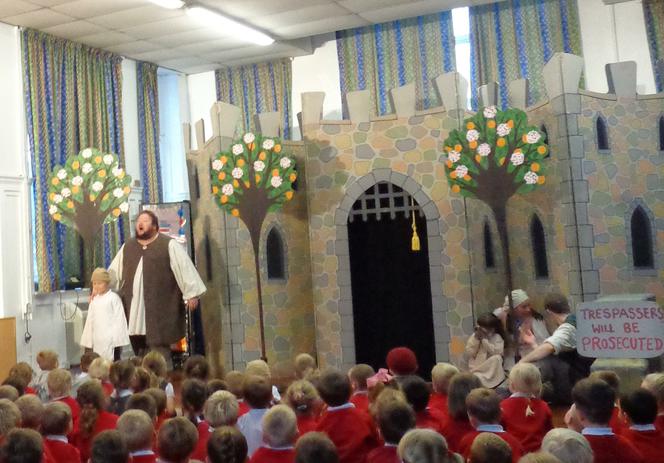 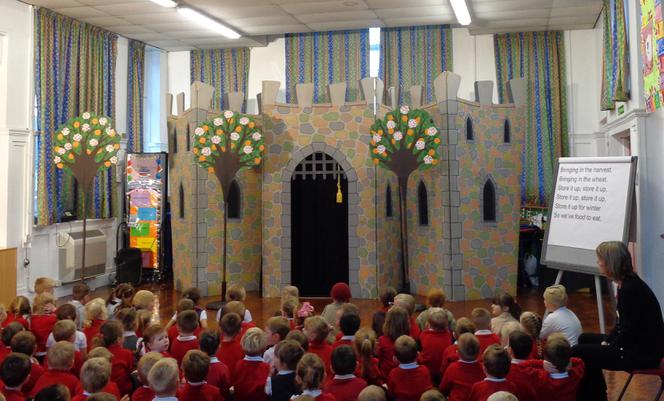 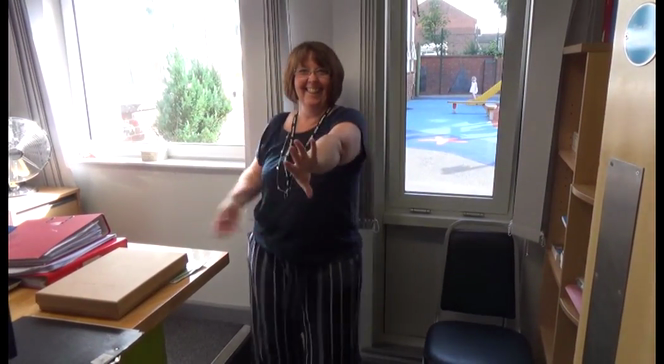 To celebrate another amazing year the infant staff have been "shaking their tail feathers". We hope you all have a fun packed Summer and we will see you in September ready for another fabulous year of learning.

A Musical Performance by Year 1

Red ,Blue and Green Classes enjoyed sharing their musical talents with the rest of the school during an assembly.

A Musical Performance by Year 2

Orange, Yellow and Purple Classes showcased their musical talents in a special assembly.

Sports day results are in! *DRUM ROLL* We can reveal the winning class for the Infants was Silver class and the Juniors was Class 5. Congratulations for all your hard work! Well done to everyone who participated. Check out the video of pupils in action on the Federation gallery page.
Top
Cookie information
Cookie Notice